I could say a lot about May. There's only been six days of it so far and a lot has happened. Nothing that warrants a narrative, but I promised myself that when it got to the point in the evening where I felt like watching pointless videos on YouTube instead of going to bed (Catan strategy breakdowns for low ore boards? Really, that's better than getting a good sleep?) I would write something instead.

Despite the pandemic, our house sold. That good feeling alone has been buoying me throughout the week. We bought a Skierg to celebrate.

Haven't run out of toilet paper; still no bites on my DVD Collection on gumtree.

I picked up a basketball and shot it towards a basketball ring yesterday. It was a warm and breezy late Autumn day and the ball went swish through the net. In fact, my first four shots went swish, and each and every swish I elicited through twenty minutes of sunshine unpicked a miniature scab from my heart, which then stung after the sun set and the cold air got in under my ribs.

The bird of paradise plant in the garden flowered and I was so excited that I googled how to fertilise them, sprinkled some dynamic lifter around their base, watered it in with some pea-straw and then the dog dug it up and ate it. So instead I fertilised the lawn in a roundabout way.

I received the most amount of money I've ever been paid for something a story I wrote ($640!), but I wrote it like three years ago and it was rejected so many times, and the place that bought it hasn't actually committed to publishing it, so I'm kind of not sure if they just bought the rights to get the thing out of circulation while the world suffers through COVID19.

I broke the seal on porridge this year earlier this morning. Instead of mixing in banana I mixed through tinned apricots. It was nice, but missing something - probably banana. I believe today might actually be the first day of the year I didn't eat a banana.

Who knows what the rest of the month has in store.

I am entangled by language. I can't have a single internal thought without my brain rearranging the order, switching the subject or the verb, playing it back. I can spend a twenty minute walk mentally editing a paragraph I'll never need to say out loud. I repeat words, or add additional alliteration. I experiment with unexpected terms. I consult a thesaurus about as much as one of my ESL co-workers consults a dictionary after one of my more verbose emails gets sent around (once or twice a week). I don't know why. I've been this way as far back as I can remember. Painting unnecessary prose like an undercoat on my cortex, burning time overcooking exposition. I've been doing it writing this entry with no sense of irony. It's just the way I am, apparently. A whole body thing. And that must explain why my hamstring tendon origin fatigues after the first few paragraphs each time I write. That's why I haven't felt true to myself in years. Fifty months of rehab and I can play basketball, squat a barbell, and hike up mountains. But I can't fill a page without aching.

I received my fourth submission rejection from a certain dream professional science fiction market today, but this time it ended with "I look forward to your next submission."

I'm not sure if this is a pinprick of light in the dark, hopelessness that is this writing game. Or if they've just recently updated their form rejection letter.

When I hear about people dying in freak accidents like car crashes, or under fallen branches, I can't help wondering if that person had been secretly writing a novel.

It made me sad, thinking about of all those labours of love which would never be finished. An adventure that would never call; a relationship which would fail to ignite; a twisty mystery which would forever remain unsolved, frozen in the dusty notebooks and locked out hard drives of the dead.

But then I thought, perhaps it was a good thing. Maybe those secret worlds they created would be what they thought of as they left. Maybe they live on there now. Perhaps the nothingness that our imagination comes from is the same nothingness we return to when we go.

Three major projects, on top of normal work, and family, and a dog, and eating healthy and keeping fit, and injury rehab, holiday planning and home maintenance, and I decided to write a trilogy. 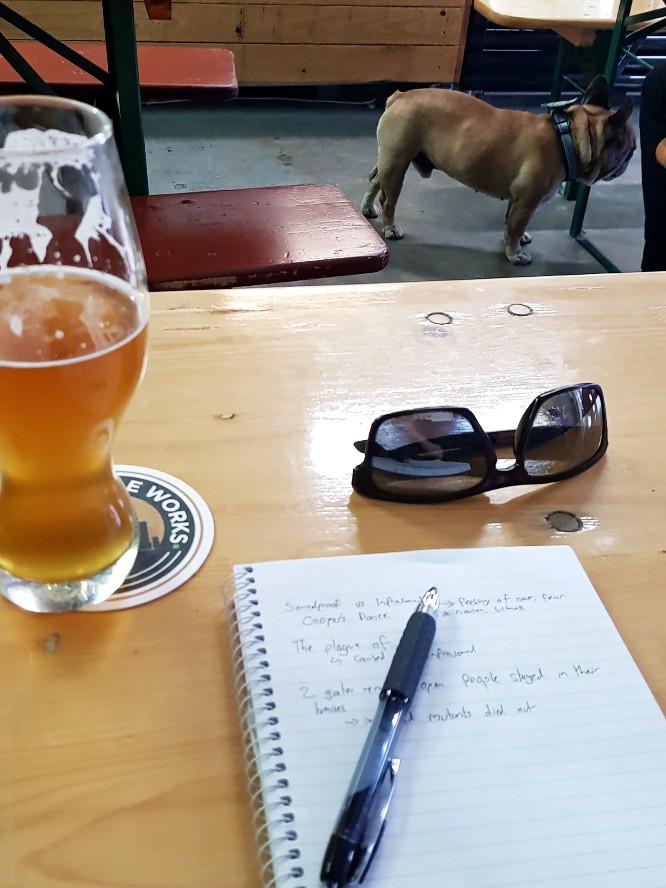 My publicly declared deadline to finish my second draft has come and gone. That, along with high temperatures and DNA destroying UV from 9 to 5 has seen me spend much of another weekend in front of the computer writing and editing.

I like writing, and most days of the year I'd be thrilled to have such long blocks of time dedicated to stories, but this book has taken a long time, and at this point I'm more keen to get to THE END than I am to savour the experience. This will necessitate plenty of effort on the third draft to turn it into 80,000 words of consistent pith and joy.

Anyway, despite the thousands of words that were typed or tweaked on Friday night and Saturday, I found myself feeling a bit unfulfilled and discouraged by the process, and not truly looking forward to Sunday's wordsmithing, nor certain what I could do differently.

I've mentioned before that I use a mini Kanban board at home to replicate the one in my office. On it I track home maintenance, holiday planning, and story writing. Last night I added a few house tasks I'd been putting off. Gardening, cleaning and plumbing. 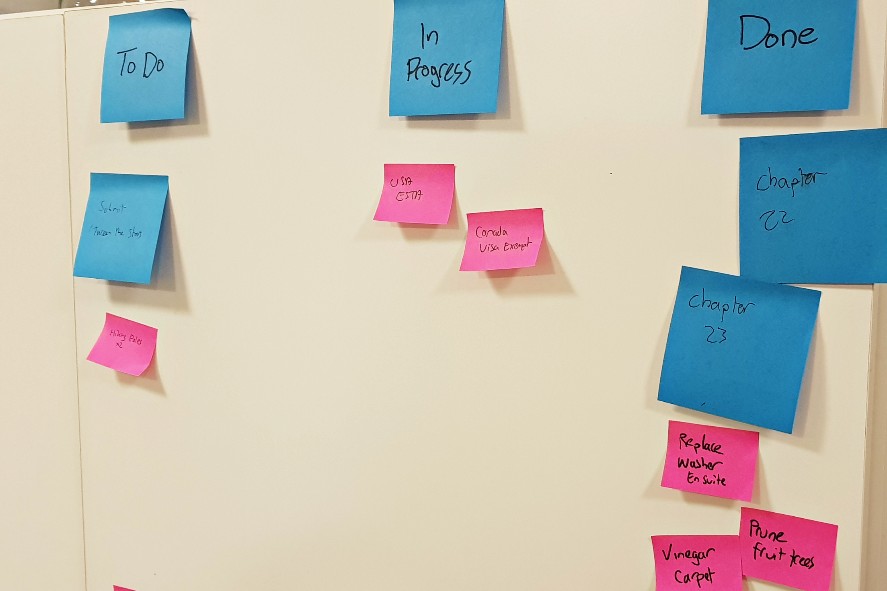 The board at the end of the weekend.

Today I supersetted writing with small victories, and despite getting a smaller (yet still significant) amount of prose fashioned, I feel more satisfied today with my accomplishments. I think my words benefited from it too.

That's my writing tip for today.

If I have spoken to you in the past two months, I've probably mentioned that I'm on a mission to finish the second draft of my novel by the NBA All Star Break.

All writers will have different processes, but for me the first draft is written in hurried scribbles across multiple notebooks. The second draft is all typed up, moved into Scrivener, has all placeholders corrected, and what was once scribble is now written, pithy, and without plot hole.

This novel has been particularly challenging because I did not feel like the ending was strong enough, and in bolstering it I have had to rewrite the last 10-15% of the story. It's a much better tale for it, I think. And a lot more for me to type up, fill in placeholders, correct plot holes and add pith.

NBA All Star Break is this weekend.