Listening to Spotify's 'Detox' playlist while drinking a beer at midday. #2017

(You can listen to these songs on Spotify for free)

I don't really write about music anymore. I will say that the Jai Wolf track is like peak M83, and that the Mogwai song is a really satisfying slow build when you're paying attention.
The mix is 81 minutes long, because it's 2017 now. Take that CDs! I outlived your relevance!

As I'm the only one who cares about these mixtapes and hence will read this far, I'll say this: Brad, don't give up on your dreams no matter how hard it seems sometimes. You'll be right, and if not, we all die anyway. I hope you're having a good time in whatever future year it is and the technology that replaces Spotify has all of these songs in its catalogue.

When I posted my first entry of the year I was surprised to see it pop up with the date of 01-01-1995. I went back to the form and realised my dropdown date picker looked like this: 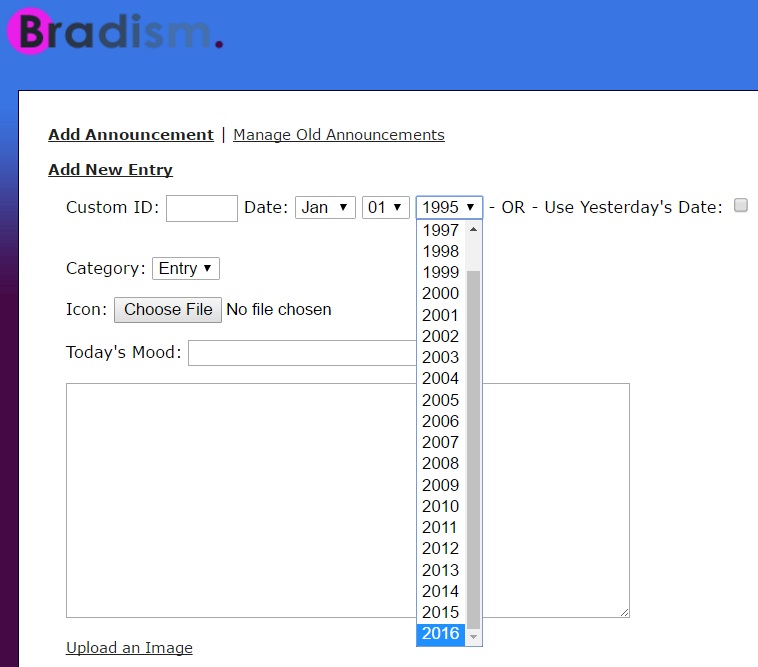 When I'd originally coded the add entry form I'd been clever enough to have it automatically select the current day for me, but for some reason (efficiency maybe?) I hardcoded the end of the loop of years to be 2016 (much more logical than $i <= date("Y"); )

I was even more surprised that the date range started in 1995. I wrote this code in 2004, so what was I expecting? That I would stumble upon some forgotten, handwritten scrawls from primary school and transcribe them into my journal? Did I really have more confidence in my ability as an eleven year old to write new journal material than in my ability to maintain the journal until 2017...

I realise I actually might have done this just to give myself something to write about twelve years later.

Despite reading the news, I'm staying positive about 2017. I've got a feeling that this year I'm going to write the best novel I've ever written.

Because everything I've written so far has been fucking terrible.

A Dog Driving A Tractor 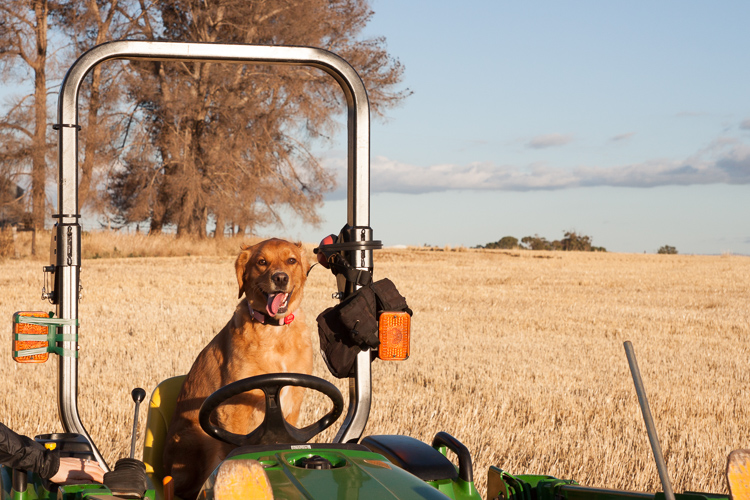 Self driving cars are going to improve the quality of our lives in the future to amazing new heights. I'm not talking about improvements to traffic and freight and commute times, although those will be swell. I'm talking about when German supermarkets start rolling that technology into their trolleys and all the other chains copy them. Picture your trolley following you around the aisles, and taking itself back to a trolley return when you've unloaded it. Imagine how livable it will be in suburbs near a giant shopping centre when the trolleys littered in the nearby streets, outside apartment blocks, and in the ditches next to the train stations all have the ability to drive themselves back home.

Also, it was 41 today. For those who've been following this week and are curious, the max temperature select is hard coded up to 50.

Sometimes, when I want to feel nostalgic, I'll play music that I listened to heavily during a past period of my life. Music is second only to smell in that it can transport you to another time with a single twinge of the sense. And it's much more convenient to recreate on demand than odours.

Other times I might read through an old year worth of journal entries to reminisce. It's amazing what kind of extra memories are conjured simply by reading through thoughts I wrote at the time. I feel plugged in to that era.

On days I'm feeling really narcissistic I'll do both. The year's top singles while reading the year's posted experiences. It's like my mind is right there back in 2011 or 2007.

Sometimes I'll listen to the top songs from one year while reading the journal entries from a completely different year. That's an uncanny mental sensation. I can feel parts of my brain distorting in jelly-like ripples as it tries to chronologically orient itself while being thrashed by waves of nostalgia.

Sometimes I like to turn the hairdryer at my armpit and hold it there. There's a point right before the skin burns where the nerves tingle in a way I've never felt anywhere else on my body. I don't know if it's pleasure or pain, but something makes me keep doing it.

It was sunny at lunchtime today. Skin-burning sunny. There was a lot of exposed skin getting around town. Across the back of someone's exposed shoulders the word "Invincible" had been tattooed. That's a courageous tattoo. I wouldn't even journal that word.

Later on I saw a guy with a parasol, which I thought was even braver.

I need some new clothes.

I have a new problem where I feel like I can't go into a clothes shop if I'm currently wearing that shop's brand on the day.

Seeing that I now exclusively wear Rodd & Gunn polos, this is not good.

Today I did a lap of a food-court and then gave up. I left, but stopped and reasoned with myself. I worried that I could be feeding a condition where I couldn't make decisions. If it continued to grow I might one day starve to death.

So I marched myself back into the food-court and up to a Thai food stall. I ordered a regular serve of satay chicken with noodles. It was very bad.

Our office has a boiling water dispenser and I do use this to wash out my coffee cup prior to making my next coffee.

Today the person behind me muttered something under her breath when I did this. I thought she was feeling impatient just because I was delaying her cup-of-tea workflow. But she then asked me to think about how wasteful it was to pour boiling water down the drain. Then she used boiling water dispenser to make her tea.

I thought about it. At a universal level I don't see what the difference is.

I've had some great times on the January 26ths of my life. Usually sitting around with friends in backyards, listening to the Hottest 100, cooking and eating animals that someone killed for us, swimming or playing in shorts and bare feet.
That's what Australia Day was to me, and to a lot of people who presently have access to social media and news website comments. I can understand the defensiveness whenever the idea of cancelling Australia Day comes up. Life in Australia has changed over the last two decades. We work longer, commute further, communicate less with the people around us. We have the all the tragedies in the world beamed into our eyeballs by our phones and computers and the televisions in our living rooms, bedrooms, train stations, on petrol pumps and inside elevators. For a while there Australia Day stood out as the one bankable opportunity where we could all forget about the shitty state of the world and our lives, and revel in tipsy, nostalgic ignorance with our friends.
These experiences were already under threat from house prices, social apathy and a decreasing number of friends with access to a hills hoist. Then Invasion Day started trending.

Like a lot of Australia Day-celebrating adults I grew up in whiteland, where other races and cultures were like chocolate sampler boxes - mostly brown, and only one of each. At my school we had the Indian guy, the Japanese girl, the Greek, the Arab. I don't even remember there being a Chinese person or an Indigenous Australian. I'd like to pretend that was because I didn't see skin colour, but I suspect there really were none.
I also don't like acknowledging genocide, or other human atrocities. Who the fuck would? They are evidence that people were uncaring and brutal in the past, and a reminder that we had to go and descend from them.
But reality shouldn't hold us back from changing our views over time. It's going to take another millennium until we've narrowed ourselves down to one culture. Until then we don't have to act like because we were ignorant in the past we have an excuse to be ignorant in the future. We shouldn't pretend that the 26th of January 1788 was just one of many bad days for certain other people, even if we weren't there personally on account of not being born yet.

I doubt that the people who argue in favour of keeping Australia Day on the 26th are really fighting for an annual celebration of the day some British ships docked on NSW shores. They're fighting for those nostalgic feelings of Australia Days past. No one is out there calling it "Happy Genocide Day." They just feel upset when people they don't know want to turn the one day which used to offer a respite from how terrible humanity behaves turns into a day where we all talk about how terrible humanity behaved.

There's an easy fix for all this. Change the date, recognise the hurtfulness of the existing one, keep the rest of the festivities. Finding an appropriate date is going to be impossible. Is there a single day and month combination where zero original land owners were murdered? I doubt it.
So let's make it January 25. The day before the landing. The day before the atrocities started. A summer day where we can still fondly remember better times. And we can all work on being better people, so that on January 26th 3017 humanity hopefully has no recent genocides to think about.