Brad's Summer Journal 9 starts with an inappropriate storm rolling across the plains, witnessed from Belair. 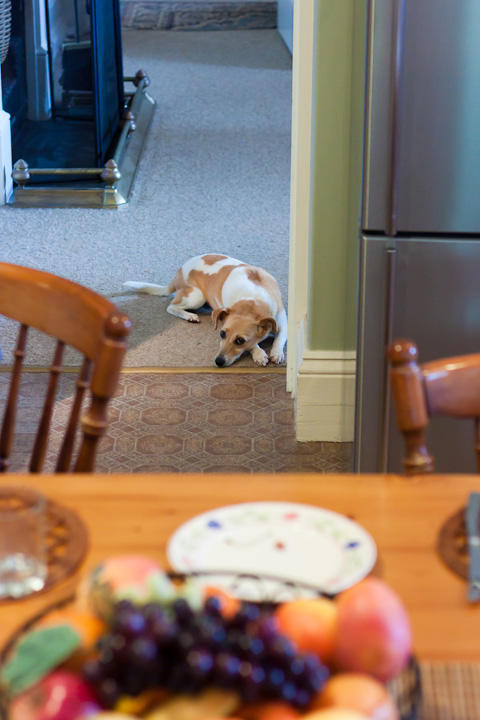 Dogs can sense storms. Some dogs... 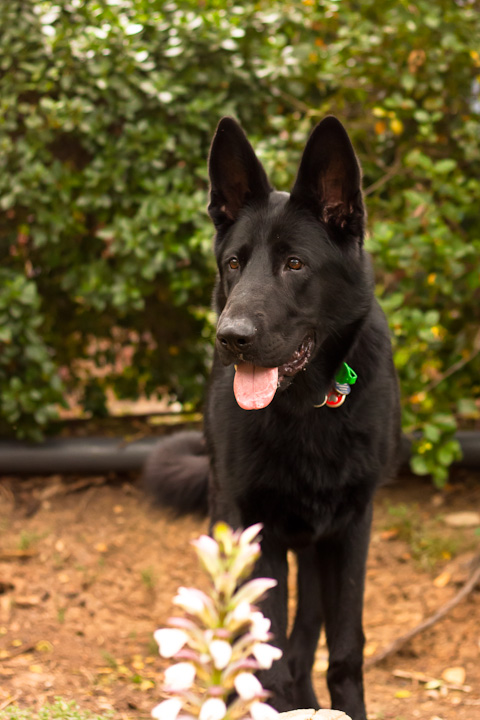 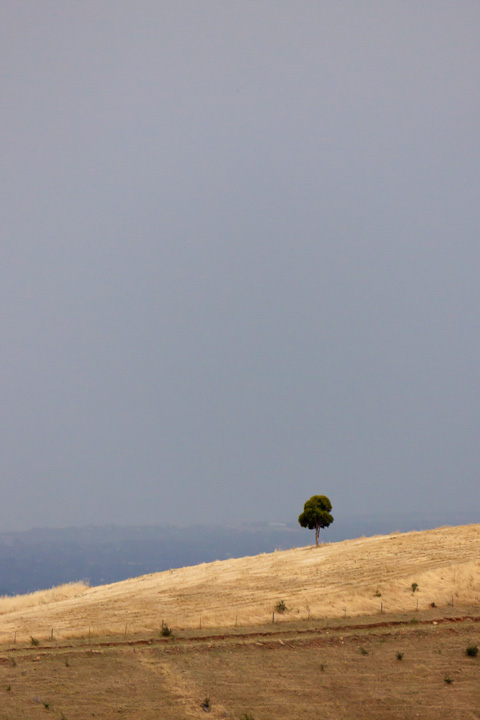 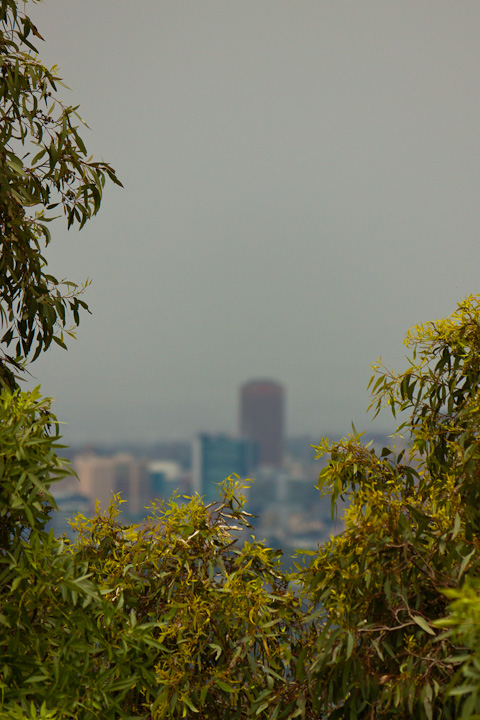 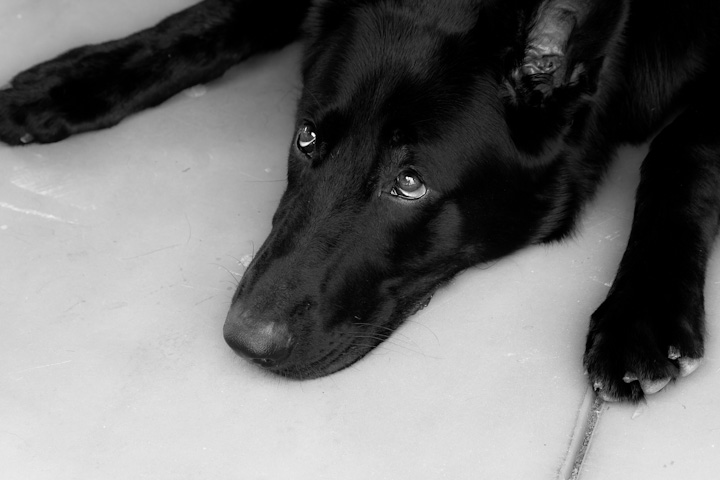 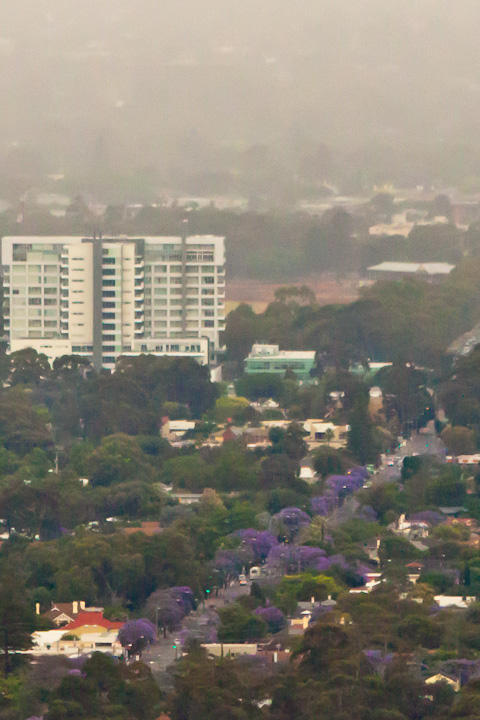 Antibiotics are the bomb. For over a month I've had a throat/nose infection that wouldn't quit. When the second offensive started late last week I finally went to the doctor who gave me a prescription. Only a few days later and I'm feeling much better.

The antibiotics' instructions say "Take immediately before, or with the first mouthfuls of food." It's possible there's some sort of physiological reasoning behind this command, but I have been happy to believe that it's because the drugs are using food like a Trojan horse to sneak past the infection in my throat, build a base in my belly and then launch a sneak attack from behind. Possibly using reapers.

Yesterday Adelaide had it's wettest day of the year. This included December's average rainfall slamming down in just over an hour. I was in office, and had a pretty good view of everything unfolding. It was some apocalyptic shit. The summer sun was completely eclipsed by inky black storm clouds around 3pm. Pretty much the entire floor stopped working (which for most of the day was ogling the radar on Weatherzone anyway) to gather around the windows and titter at the storm. It was good fun. My phone tried to take a photo. 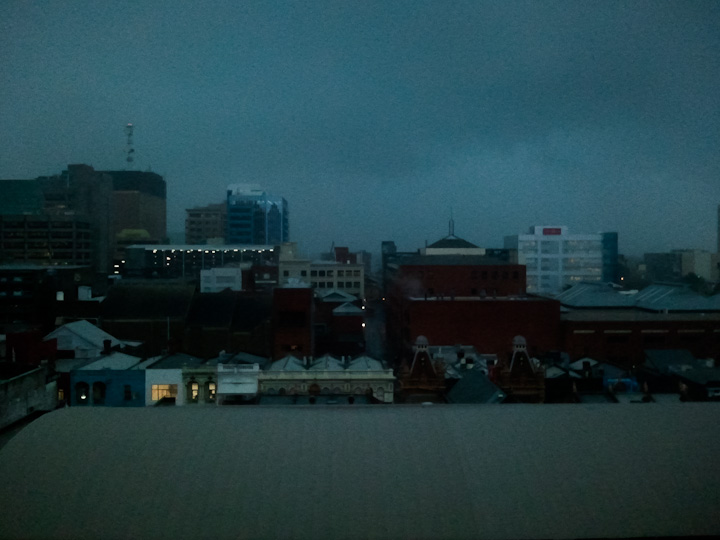 During a gap between downpours I walked home, taking my usual route along the Torrens. The river was flowing strong, but hadn't burst the banks. Most of the footpath was a river unto itself though, River Torrens Minor, about an inch deep. There were lots of soggy birds around: pigeons who look like they didn't know what the fuck had just happened, horrified adolescent magpies, unimpressed ducks.
Near the King William Street bridge there was an unusual sight. A Magpie Lark that looked reasonably dry was walking towards the river, crossing over a major puddle on the footpath. For all intents and purposes it looked like Jesus walking on the water. If Jesus was a bird. I slowed down to watch it (I regretted that later as I got rained on a lot) and the bird also seemed to realise that it was doing something impressive, because when it jumped up onto the rise between the river and the puddle it turned around and looked down at its reflection, as if pondering 'Did I just walk on water like mofo'ing Jesus?'

I'd stopped now, watching the bird tilt its head side-to-side like he was posing in a mirror. Then he started to strut away, only at that point noticing that I was watching him and he realised I'd witnessed his whole show. After a second of eye-contact he spread his wings, stared directly at me and chirped "Like a G6!" And then he flew off.

Someone should make a voodoo doll of me. Not just any someone. A voodoo someone who wears lots of beads and who knows their occult stuff reasonably well. They could subtly pull a hair off my scalp while I waited for a self checkout to become available at Woolworths, and social engineer their way through Facebook until they were friends with one of my friends, find a photo tagged as me and use that for their wicked spell. The doll should be constructed using the finest materials - waxed hemp fibre with a high thread count, beads from Spotlight's pricey aisle - and they should burn off any loose threads with a genuine Zippo.

Then, once they had sewn the final stitch and appropriated any rituals, the doll should be taken to a tropical island somewhere and placed gently on the sand facing the ocean. And they should then be so kind to it. Particularly kind to all of its joints, saying soothing things to tendons and cartilage and patting them softly in a reassuring way. They should play upbeat music from a battery powered boom box that contains encouraging lyrics and use a small, paper fan to spread a gentle breeze across the doll's form. When night eventually falls they should erect a small bistro in a shoebox and cover it with an umbrella, seat the doll and ensure his top hat is perched correct. And do this each day until I post 'stop'. 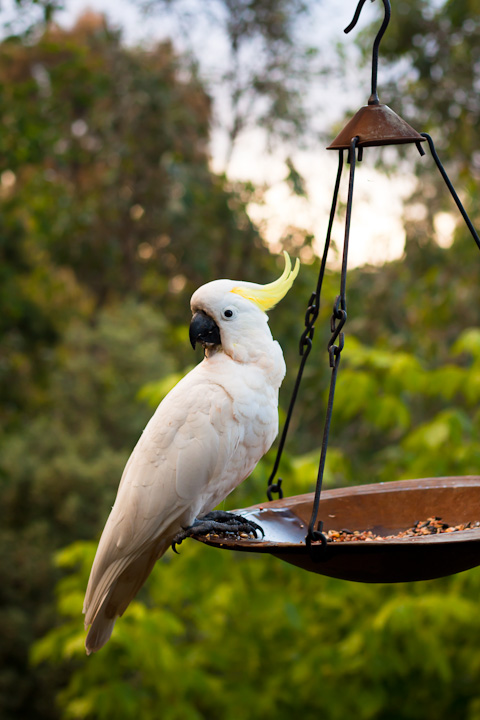 If I had to Chow's-Thai-Review this Summer so far I would give it a low score for service and quality, and a decent rating for venue. And I'm not sure what I'd give it for value.

Beaches are like the easiest things to take a photo of.
You just need to rock up an hour before sunset and things look nice for you. 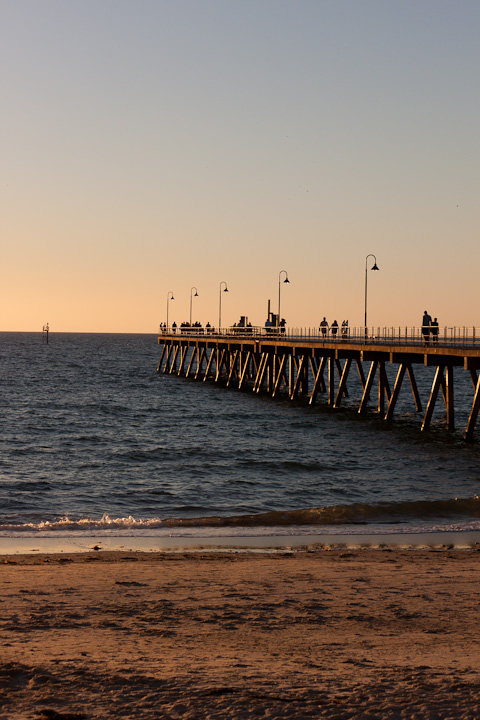 Don't get there too early or things will look weird. 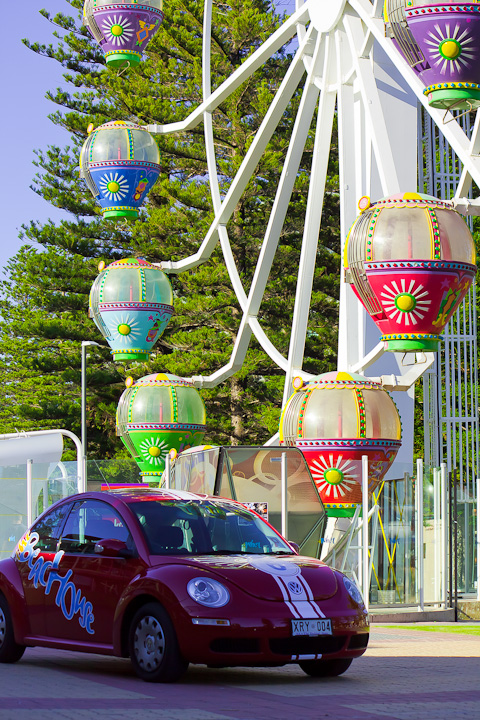 My brother is in town. I took this picture of him. I think it's probably the best photo ever taken. How much would you pay for a photo of yourself that looked like this? 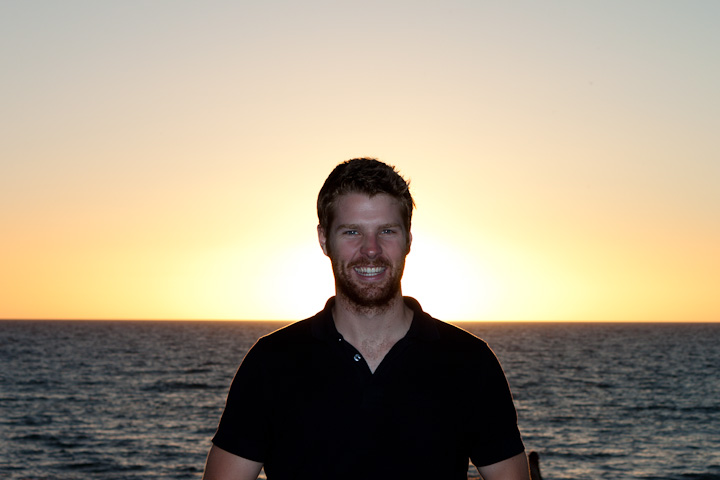 As the sun set, I stood on the end of a jetty exclaiming loudly to many fisher people that I hoped the windsurfer out at sea would cross in front of the sun before it set, because his silhouette would make a 'boss' photo. He edged incredibly slowly towards the sun, and after taking my last shot and sighing heavily, I turned around and he legged it past the sun, much to the mirth of the rest of the jetty. 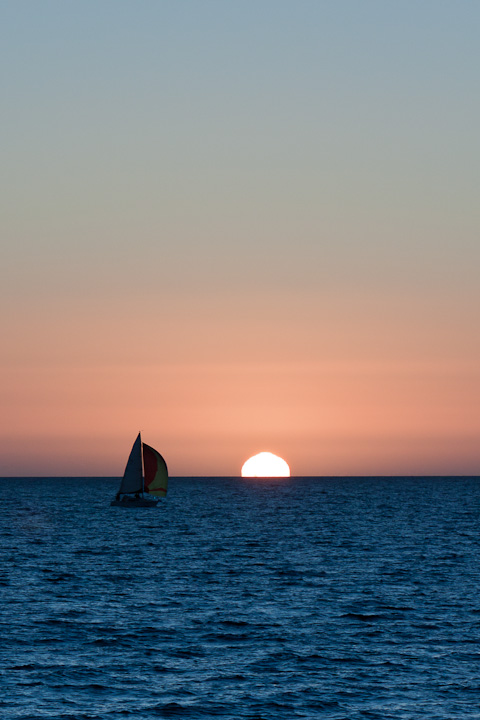 Also, there was ice cream. The End. 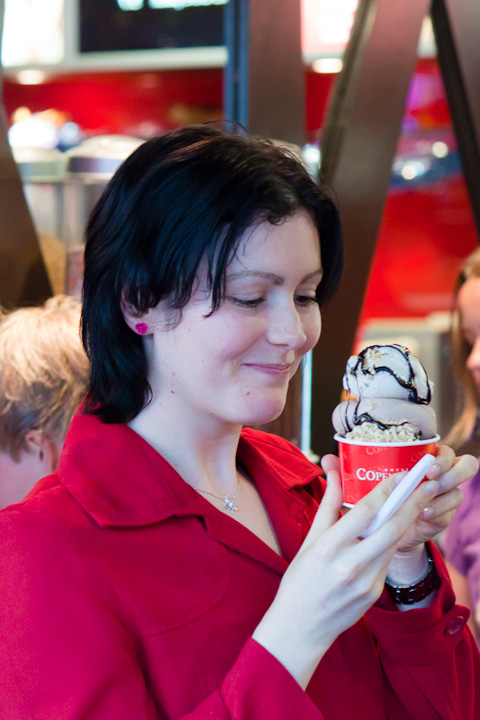 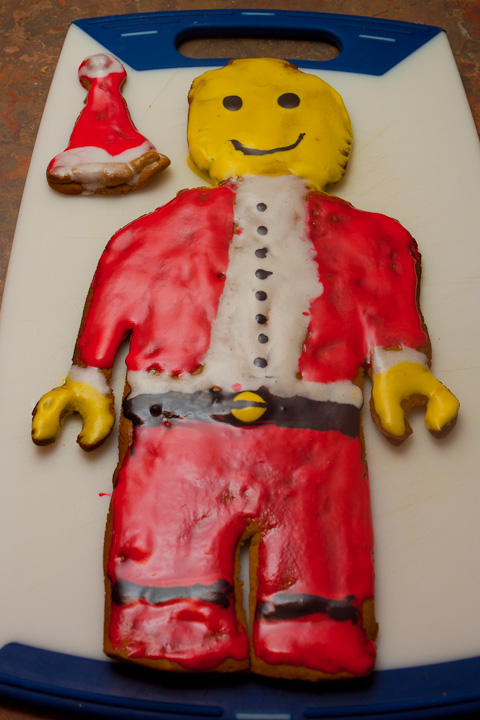 The Past Week In Pictures

The past week has been crazy busy with Christmas and moving and camping and cleaning among other things. There has been a lot of mingling during all this, so I've sort of lost track of what I've told who and vice-versa.
Last Thursday I caught the red eye to Sydney and within an hour of landing found myself on the main street of Engadine waiting for a property inspection. Less than eight hours later I was back on a plane with our accommodation in Sydney sorted for at least the next six months.

The rest of this story is told in picture format:

Continue Reading The Past Week... 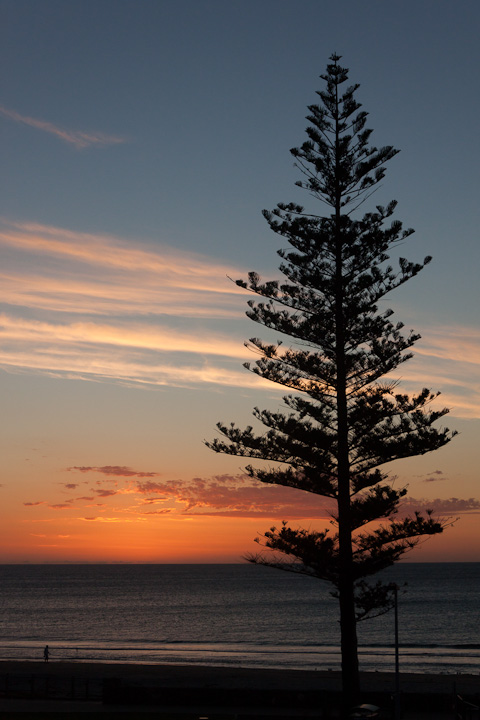 A few evenings ago I was in Moana at Deb's house, playing NBA Jam and eating a regrettable amount of chocolate covered honeycomb, given the current activity.
Deb has a balcony looking over the ocean and we had the blinds shut tight to try and prevent sweaty palms from the Summer heat. As the sun arrived closer to the ocean we went outside to enjoy the new breeze. It looked kind of pretty, so I took a photo. At that point Josh mentioned something along the lines that "Sunsets are a bit overdone" to which I quickly agreed. This is actually a concept I've explored myself.

So, I analysed why I'd bothered to take the photo, admitting it probably wasn't for the sake of getting on the local weather as the background photo seeing I've never submitted anything to anything in my photographic life. I realised that what I'd really wanted to record in a photo was a picture of hanging out with my friends playing games and having fun. But I don't even know which lens you would need to capture the feeling of that in a photo. So, like I realise now I often do, I took a photo facing away from what I was actually trying to take a photo of. I think this is an effect of my natural inwardness: Keep actual thoughts to self, record a related reminder to trigger memory later. Like most of you, Journal.

I don't think I have any resolutions for 2011 - other than to avoid chasing my 2008 goals for the fourth year in a row because I don't think that's ever going to work for me. But I will try a bit more to keep myself in front of the camera. And also give up smoking.

All the best Internet, in the words of the checkout boy at Woolworths today: Happy New Year, have a great night.